Cruelty Squad, while appearing simple on the surface, has a variety of complex game mechanics.

As a corporate liquidator, your objective is to find and kill your designated targets then leave the level by walking to an EXIT area. How and when you do it is up to you. Your targets are always indicated by a crosshair overlaid on your HUD and will be guarded by hostile creatures that will attack you on sight. These enemies are passive at first and an eye indicator will appear on the left of your screen when you are being detected, enabling some form of stealth approaches.

Levels are large, encourage exploration and provides multiple paths to the targets and to a variety of secrets, some of which will require specific equipment, weapons or even difficulty modes to be accessed.

Your health is indicated by the top left HUD indicator. When it reaches 0 or less, a 5 seconds countdown will begin before your body presumably self-destructs, however if your health drops below -40 then the countdown will be skipped and you will immediately die. This countdown can occasionally save you when you make your run to the exit, however. Dying will cost you money (Except in Power In Misery difficulty mode) and can also lower the difficulty level itself, This will be indicated by the message appearing on the left on the death screen.

You always restart at the beginning of the level, there is no quicksaving or checkpoints. Weapons are not saved as they need to be brought back to the exit, however you do keep the organs, fish and implants you collected.

There are four main difficulty modes within the game. At first, the player has very little input on what difficulty they are playing at, but as you progress through the game, changing between the states becomes easy. Three of the four difficulty settings come with special doors, that can only be opened while playing on that setting.

Divine Light is the default difficulty of the game, and the game's second hardest setting. On Divine Light, enemies deal full damage to the player, with little other changes. The game's border sports a robotic silver scheme with red details.

Divine Light is lost after dying once with it enabled. After you die, you will be put on the "Flesh Automaton" difficulty. You can restore Divine Light by going to a Divine Light Shrine, of which there are two in the game.

You can also restore Divine Light by beating a level on Punishment Mode for the first time.

Flesh Automaton is the second easiest of the four difficulties in the game, and is enabled after dying once while on the Divine Light setting. On this difficulty, enemies deal half the damage they normally do to the player. Flesh Automaton has no special doors, and no other gameplay modifiers. In this state, the game's border takes on a half fleshy, half robotic state. After dying in the same level four times, the difficulty is changed to Power In Misery.

Power In Misery is the easiest difficulty in the game, and is enabled after dying four times in the same level while on Flesh Automaton difficulty. When your difficulty is changed, the death screen changes to display a message regarding your state. It reads, "Due to your wasting of company resources by hogging the genetic recombinator, you've been selected to participate in an experimental biological enhancement program. All your debt is cleared and from now on your body will regenerate by itself. Can't say I envy you though."

On this difficulty, enemies deal half the damage they normally do to the player, and the player can activate corpses with the "use" key to eat them, restoring one health. In this state, the game's border is entirely fleshy. Power in Misery has a single door, located near the exit in Pharmakokinetiks. Inside is an NPC, who also seems to be in the Power in Misery state, who has dialogue talking about how eating corpses can save money and that reversing the process is unlikely. He also say that, sharing the same condition, the player is now family to him. Along with the fisherman, it's one of the very few friendly interactions present in the game.

Hope Eradicated is the secret hardest difficulty in the game. On this difficulty, every level is changed to add an extra target, extra enemies, and randomized high-tier enemies. Enemies deal full damage to you, and the games border takes on a jarringly different black and blue scheme. The sky also becomes red, and the face of The Archon becomes visible in the sky in place of the sun. After fighting The Triagons and experiencing the LIFE ending, the sky will instead be green and purple, with the three Triagons looking down upon the world.

There are three ways to enable Hope Eradicated, two of which involve a shrine.

Additionally, there are three doors that require Hope Eradicated difficulty to enter in the game.

The only way to exit Hope Eradicated is to use a Divine Light shrine.

These modifiers can be triggered on and off at will in the Level Selection menu.

Chaos makes more enemy variants spawn. Modifiers can be placed on any enemy, and include invisibility, armor, and gaseous explosions on death. It is so far unknown if Chaos provides any benefits to the player. Additionally, multiple targets are added.

DEATH Mode is a permanent, irreversible change to the player, that provides a few small benefits. It is unlocked in Pharmakokinetiks, and requires Hope Eradicated. Upon entering the Pure Optics building, a new friendly NPC appears, who tells you that he's been expecting you, and you're coming in for a procedure. Telling you to head down the hallway and use an object called the "soul emulator," he tells you the results are truly "life-changing." Going through the cursed door and interacting with the object replaces the standard green gooey "LIFE" indicator with a purple, spiky "DEATH" indicator. Death mode has three main effects.

Steam guide for unlocking DEATH mode if you are confused.

There is a stock market simulation built into Cruelty Squad which acts as the primary method for acquiring money. 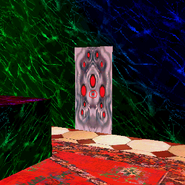 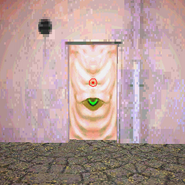 The Power in Misery door seen in Pharmakokinetiks. 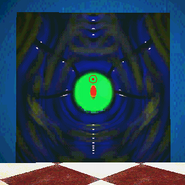 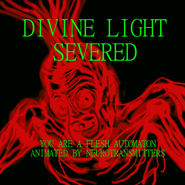 The status message that appears when the player's difficulty is downgraded to Flesh Automaton. 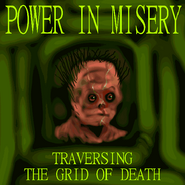 The status message that appears when the player's difficulty is downgraded to Power in Misery.
Community content is available under CC-BY-SA unless otherwise noted.
Advertisement